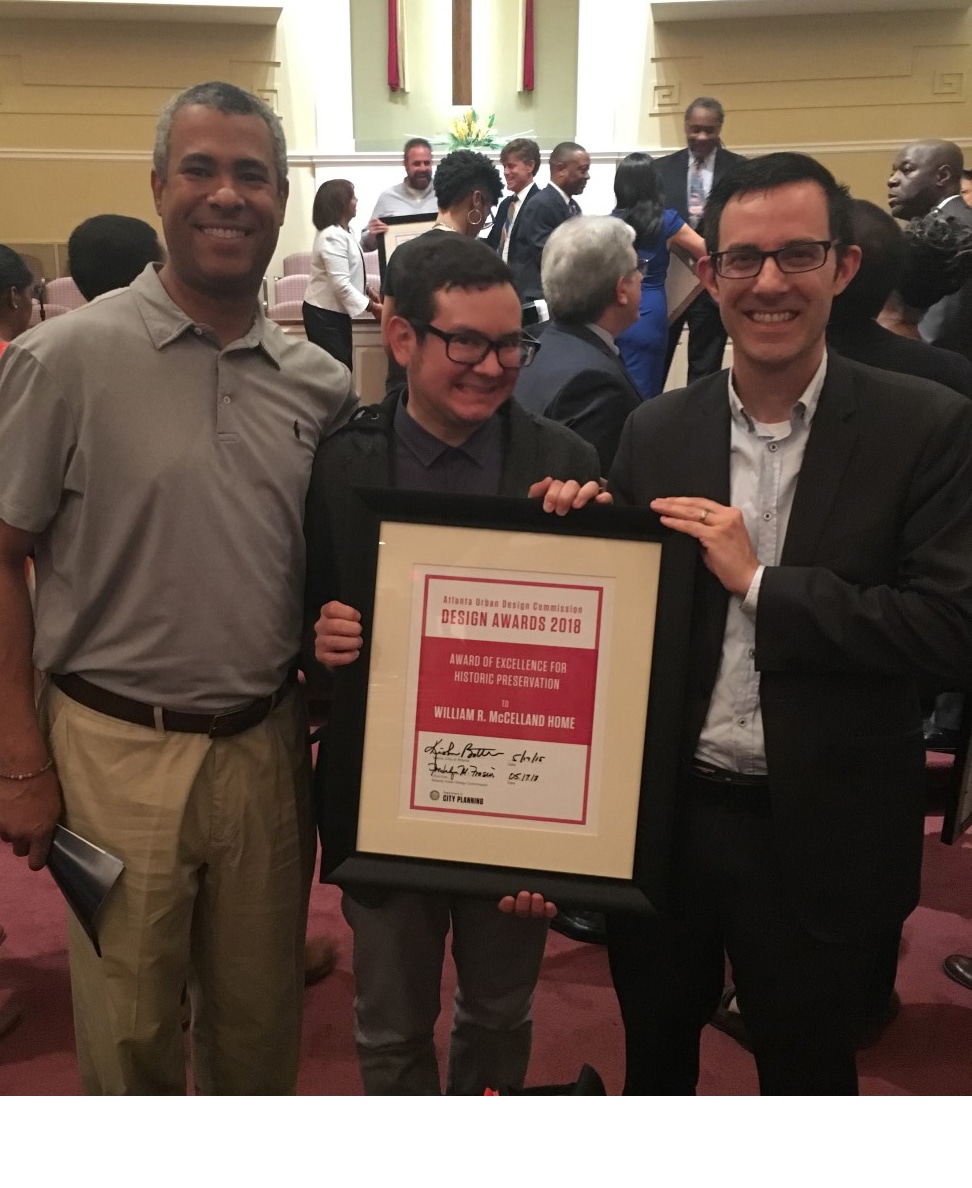 UPDATE: Following the announcement of the award, The Atlanta-Journal Constitution (AJC) interviewed Caleb and photographed the house. Click here to check out the article and to see more photographs of the interior.

The Atlanta Urban Design Commission has given its annual Award of Excellence for Historic Preservation to the William R. McClelland Home in West End. The 1902 structure on Peeples Street has been meticulously restored by homeowners Caleb Racicot, a Senior Principal at TSW, and Daniel Vasquez, along with a renovation team that included Jerry Davis of Park Atlanta Homes and Thomas Portis, Jr., of Southwest Paint.

The annual awards program honors projects, programs, individuals and organizations the Commission determines have contributed toward the enhancement of the City of Atlanta’s built environment, the preservation of its physical heritage, and the sympathetic balance between the old and the new. The three-year, evidence-based restoration of the McClelland home was conducted in accordance with the Secretary of the Interior’s Standards.

Caleb is no stranger to historic preservation. Throughout his professional career, he has been involved in writing preservation ordinances and guidelines for various cities. He has worked in both the public and private sectors and is familiar with state and federal preservation laws and procedures, including the Secretary of the Interior’s Standards. Caleb currently serves as co-chair of West End neighborhood’s preservation and urban design committee, promoting awareness of historic preservation regulations and programs and working with applicants to conform to the plans.

Nevertheless, he and Vasquez were not specifically seeking an historic home in need of renovation when they found the McClelland home. “We were looking for an older house that was within walking distance of MARTA’s north-south rail line and was located in a walkable historic neighborhood,” said Racicot. “After looking at several houses that had been updated, we realized we wanted something with true historic character — dings, tiny bathroom, scarred floors and all. The moment we walked into the McClelland Home and saw its intact plaster walls, fireplaces, stained glass, hardware, woodwork, etc., we fell in love, despite the fact that it needed a lot of work to make it livable. Fortunately we could do a lot of the small restoration work ourselves and were able to involve Jerry Davis with Park Atlanta Homes as the contractor for the larger projects. Without his knowledge, support, and shared attention to detail, this restoration would never have been possible.”

The home is one-story, blending design elements of both the New South Cottage and Bungalow house types. It is generally symmetrical, featuring three central halls, each flanked by two equally-sized rooms. The exterior includes a hipped roof and a spacious front porch across the entire width of the home. A photo estimated to have been taken around 1910 shows the front gable once housed a stained glass window similar to existing ones within the house. The home’s first owner, William R. McClelland was a partner at the J.M. High Dry Goods Company. In later years, J.M. High’s widow, Harriett “Hattie” Harwell Wilson High, donated the family’s Peachtree Street mansion to the City to found the museum that would eventually become Atlanta’s High Museum of Art.

The house’s entry hall features a stained glass back wall, a unique feature of the home. Multiple sources plus an examination by two glass conservators suggest that its abstract design is original, despite dated from 1902. In order to complement the stained glass, Racicot and Vasquez have incorporated original wall treatments into the dining room, parlor, and entry hall. “We appreciate that this house was never stripped of its character,” said Racicot. “The same family owned the home for almost 70 years, and apparently they never saw a need to rip out the late Victorian details. We love the original, unpainted pocket doors, the fireplaces, and, of course, the beautiful stained glass windows.”

A major component of the renovation process included discovering and restoring the home’s original colors. Thomas Portis, Jr., used original paint chips to reproduce both interior and exterior paint colors and even reached out to Benjamin Moore Canada to obtain paint codes for authentic porch decking.

“It was very exciting to discover the home’s original colors,” said Racicot. “We were able to uncover and restore the original wall coverings in several rooms, revealing how beautifully the stained glass, paint and wallpaper all complemented each other. It was also extremely gratifying to remove the Masonite siding that had been applied to the home’s exterior decades ago. Its beautiful to see how the home’s interior and exterior design and color were carefully designed all those years ago to create a balanced, unified whole. We are proud that we were able to bring this historic home back to life, and honored to receive the Award of Excellence for its restoration.”