Charles Brewer, founder of MindSpring, and Bill Tunnell, community planner and New Urbanist, are two Atlanta men who have built their careers on designing places and processes for human connection and interaction. Brewer built an enormously successful business that connected its customers to the internet. Tunnell and his team at TSW, the Atlanta-based planning, architecture and landscape architecture firm he co-founded, design and master plan walkable, mixed-use communities that are the antithesis of sprawling suburban development. The two have spent the last decade designing and developing Las Catalinas, a coastal resort town in the Guanacaste area of Costa Rica based on Mediterranean hill town precedents. With initial planning completed and construction well underway, TSW’s intensive role in the project is now diminishing after a decade of involvement. 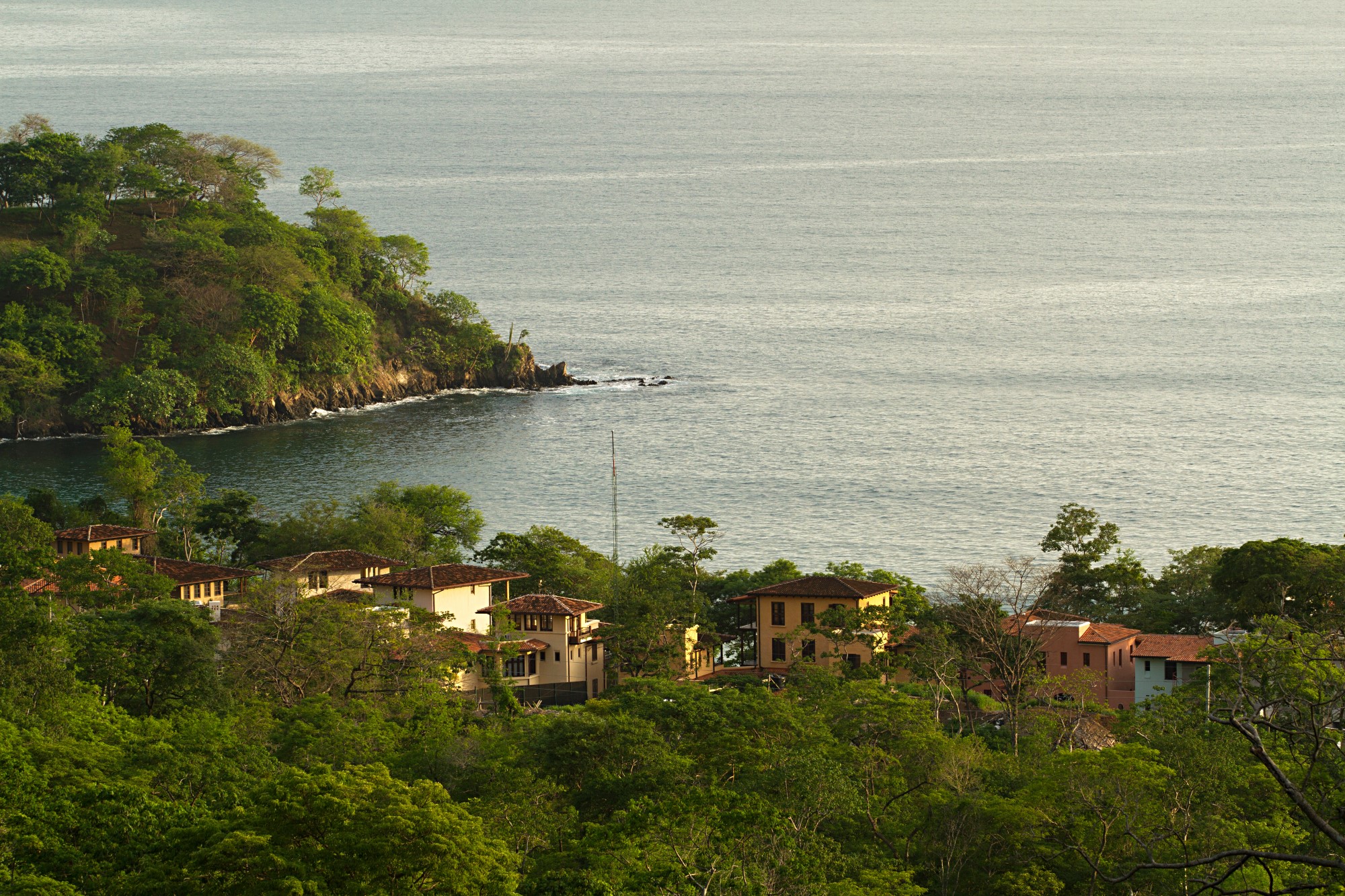 “It’s really gratifying to see Las Catalinas come to life as residents move in and visitors discover this beautiful place,” says Tunnell. “Charles and his investor team took the time to study communities around the world so we could incorporate what they felt were the best features of historic hill towns. Our team worked with his to refine the vision and then create the Master Plan for a series of neighborhoods and uses that will ultimately make up Las Catalinas. We’ve just about built out the waterfront town center, called “Beach Town”, and have two other neighborhoods under way. Obviously, this is a new development, but our goal was to make Las Catalinas feel as if it grew organically over time.”

Tunnell and Brewer first worked together on Glenwood Park, an Atlanta mixed-use neighborhood developed by Brewer following MindSpring’s merger with EarthLink and Brewer’s retirement from the company. “People were surprised I went from technology development to community development, but to me, it was still all about how people connect with each other,” says Brewer. “Almost everyone I know is unhappy about the time they spend in their cars, sitting in traffic. I started studying the principles of New Urbanism and decided to develop a high-density, walkable neighborhood in Atlanta called Glenwood Park where people could gather in the public parks and greenspaces and walk to restaurants and shops.” TSW produced the Master Plan, wrote the code, and designed the West Bartram building, one of the community’s centerpieces.”

With Glenwood Park approaching completion, Brewer began to dream of creating a stand-alone town, rather than an urban infill neighborhood within an established city. He and his investors bought 1,200 acres on the rugged Pacific coast of Costa Rica in 2006. With TSW’s help, Brewer and his partners convened planners, engineers and economic analysts for a week-long design charrette to determine what areas should be developed and preserved, the character and scale of residential and commercial architecture and transportation networks designed to minimize and even eliminate vehicular use in some areas. The resulting Master Plan calls for a tight-knit, architecturally rich series of beach and hill neighborhoods that hug the contours of the land.

The community has everything you’d expect from a master-planned resort: spacious homes, breathtaking views, hiking and bicycle trails, majestic scenery, shops and restaurants and a beach club, but something is missing — automobiles. The streets of Las Catalinas have been purposely designed to be car-free, something that was not possible at Glenwood Park, where Atlanta residents are still very car-dependent.

It’s a bold move, but one that has been embraced by visitors and residents. Says Brewer, “The purpose of Las Catalinas is to transform the way people think of ‘the good life’ by offering them a lifestyle that is healthier, happier, more connected and more sustainable. Pedestrian streets are a big part of this effort. Getting people out of their cars and into the streets on foot or bicycles completely changes the social dynamic of the town. Children have the freedom to play and explore, because we’ve eliminated the danger of someone getting hit by a car. Neighbors interact as they make short trips to the café or the beach. No cars means reduced noise, fewer emissions, and less wear-and-tear on the streets. Las Catalinas provides golf carts when someone needs to transport something heavy or bulky, and cars are parked a short distance away near the back of the property, so they are easily available when someone wants to travel away from town.”

Creating a car-free community was only one hurdle that faced the development team. For Tunnell, the challenges began with arcane Costa Rican zoning requirements and a convoluted permitting process. “We were trying to replicate town building patterns that existed centuries before cars came along, but Costa Rica’s zoning regulations were not written to accommodate features like streets that are as narrow as 4 meters (13’) wide from building to building. In order to comply with their code, it was necessary to work under a zoning category where we had to lock in the detailed design of every building in the initial phase before we could begin construction,” Tunnell said. 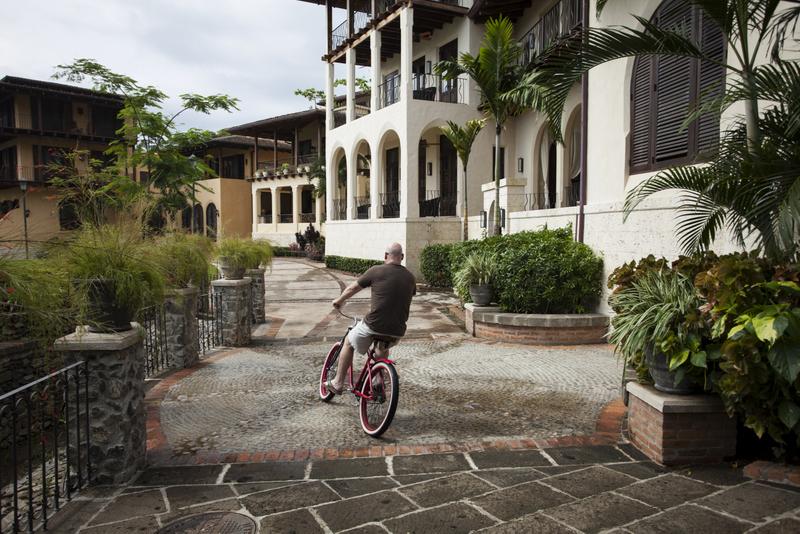 Also challenging was devising an “urban” architecture that could step up and down the site’s steep hillsides. In traditional hill towns, homes and shops are literally built on top of one another, for structural support and to traverse slopes. Tunnell had to re-invent a way to do that using modern materials and techniques.

“Because the property is somewhat remote with a sparse local construction industry, the development team had to start from scratch on a number of things we often take for granted”, says Tunnell. “When we began, there was no existing infrastructure – no water, no power and hardly any roads. Charles and his on-site team first had to build a workers’ village with housing, fabrication shops, dining and other support services, and provide roads and security for transporting and storing construction materials and equipment. In the process they did a lot to assist the nearby village of Potrero, where much of the project’s work force resides. Then, they had to train construction workers and sales and marketing staff. Today, Las Catalinas has an extraordinarily skilled permanent team of local people in place who deliver a very high quality of craftsmanship and customer service.”

One requirement of resort communities, unlike towns that have grown organically over the decades, is that every home should have a view, since they will be used as vacation residences. Although TSW has designed numerous successful resorts, this proved to be very challenging given the extremely dense building pattern at Las Catalinas. “We tried to emulate the organic layout of traditional hill towns, and worked with a 3-D modeling process to help us determine sight lines over and between buildings to maximize ocean and mountain views. It was very time-intensive, but I’m pleased with the end result,” says Tunnell.

TSW also wrote the design guidelines for Las Catalinas, which adapted Mediterranean building traditions to the more tropical Costa Rican climate, with an emphasis on deep roof overhangs and passive cooling techniques. Close adherence to these guidelines has resulted in a consistent character that feels timeless and familiar, yet is uniquely of this place. An important part of this character is the town’s public realm – its streets, plazas, fountains, and landscaping. TSW provided all of the hardscape design, and is very proud of this contribution to Las Catalina’s sense of place, according to Tunnell.

“As one of several architects working at Las Catalinas, I had the pleasure of designing two houses in Beach Town, the second of which is almost completed. Early on, Charles made it clear that the authenticity and diversity of the town would depend on employing a ‘guild’ of multiple talented designers. Accordingly, the design team included a number of notable practitioners, including Atlanta’s Lew Oliver. Douglas Duany, an accomplished New Urbanist and Professor at the University of Notre Dame, has engaged several of his graduate student classes in various aspects of the town’s design, and collaborated with TSW on the Master Plan. Ricardo Arosemena, a brilliant young Panamanian architect, has been especially prolific, and is responsible for numerous homes as well as the town’s beach club,” says Tunnell.

Infrastructure construction began in 2009, and the first buildings in Beach Town were completed in 2011. Construction on Punta Penca, the town’s second neighborhood, began in 2012. “After a decade of planning, designing and building, we now have a beautiful place composed of houses, shops, restaurants, pedestrian streets, plazas, parks and recreational facilities, with small hotels and inns soon to come,” says Brewer. “I look forward to seeing how the place grows and unfolds in the coming years. By design, all of the elements are arranged to create a series of wonderful, walkable public spaces interwoven with nature. Behind the town, we will maintain nearly 1,000 acres as a natural bio-preserve, with only bicycle and walking trails added for recreational use. The architecture is adapted for outdoor living, and a constant ebb and flow of fellow residents and visitors on foot or bicycle enrich the scene. Every street leads to scenic overlooks and every home frames incredible views.”

Just as Atlanta’s Glenwood Park has done, the compact urbanism of Las Catalinas challenges conventional ideas of what a new neighborhood or a resort should be. Even so, both Brewer and Tunnell believe higher-density, mixed-use communities will continue to attract residents of all generations, especially as Millennials mature.

“Broadly speaking, we need to anticipate the future and develop communities now for fewer cars and less parking, with more emphasis on transit, bicycle lanes and walking paths,” says Tunnell. “The success of Uber and other ride-sharing platforms, and the rapidly approaching advent of driverless cars will have a transformational impact on how we design communities. And yet, we as a culture continue to create a built environment that revolves mainly around the automobile. Las Catalinas is a glimpse at the possibilities that lay beyond that way of thinking.”

“Pedestrian streets are awesome, with huge advantages,” says Brewer. “When the first part of every trip is made on foot, the town becomes vastly more sociable and friendly than when people are traveling inside their cars. The safety advantages are enormous, too, especially for children. Kids get their freedom back! That is absolutely profound. In a three-story town like ours, density is effortlessly increased by at least a factor of two because you don’t have to design all the buffer space to keep moving cars at a tolerable distance from houses and you don’t need places to park them. We enjoy peace and quiet, along with a beauty that just can’t be achieved on streets with cars. I hope that planners and builders from all over the world will learn some lessons from the wonderful pedestrian streets of Las Catalinas.

“There was some initial resistance to eliminating cars at Las Catalinas, but now I think everyone who lives or visits the community sees the overwhelming benefits,” continues Brewer. “This is a topic that surely will become mainstream as driverless cars that can be summoned on an as-needed basis proliferate. I think technology like this, combined with neighborhoods built to make the most of it, will change how we live even more than the internet did.” 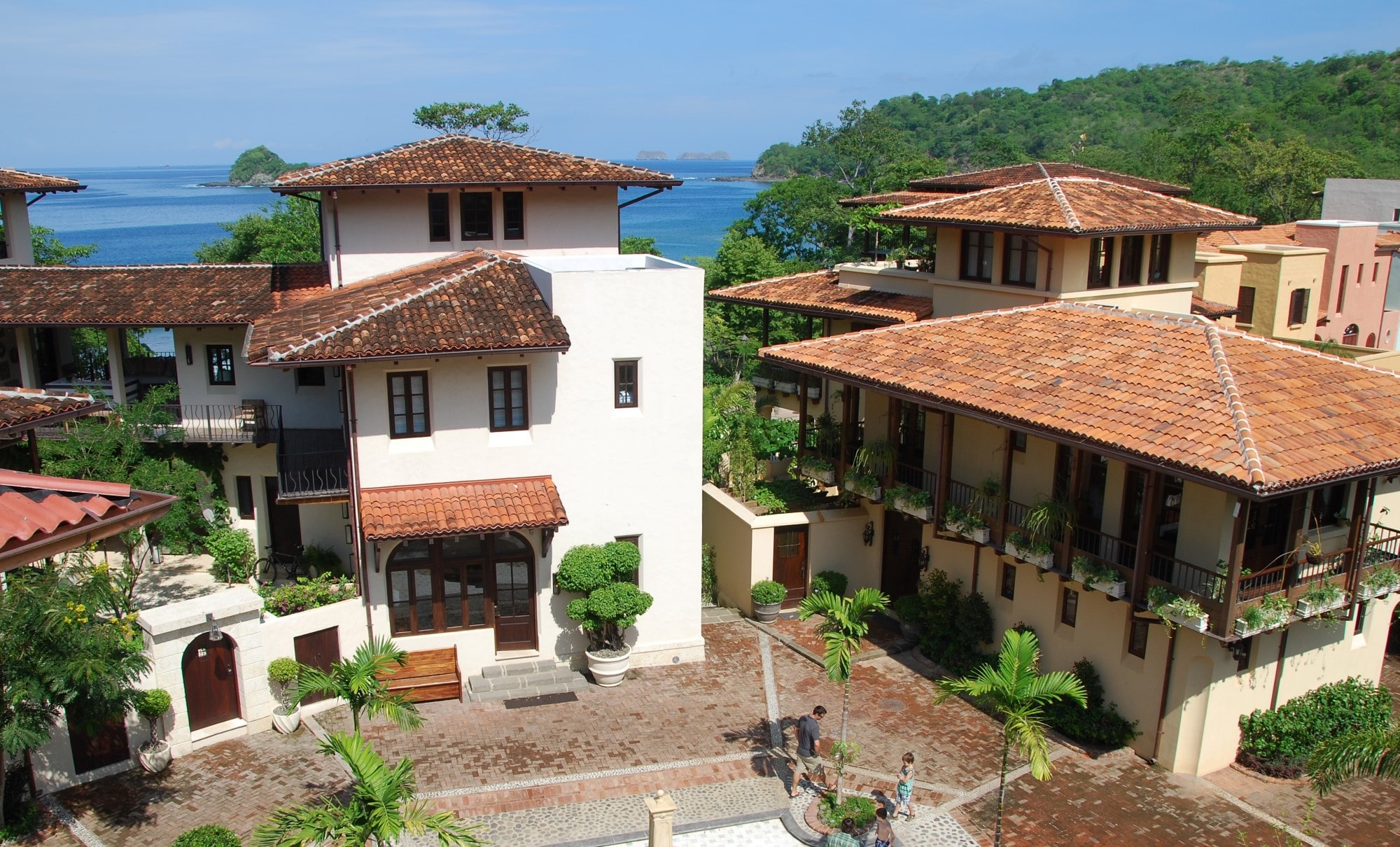